The Palace was built by Ami Chessex and architect Eugëne Jost. It was one of the most advanced, luxurious and biggest hotels ever built in Switzerland.

The First World War and the 1929 economic crash threw the Hotel into deficit. By the start of the Second World War, the company was bankrupt.

The Swiss government re-opened the Caux Palace as a detention center for British military who escaped from Italian prisoners camps; then as an asylum center for Italian refugees and later as refuge for 1670 Jews from Hungary.

In 1999, an oak tree was planted and a memorial plaque was installed in the park of the Caux Palace in memory of these refugees and those who were not admitted entry into Switzerland during World War II.

Around a hundred Swiss individuals and families, led by the Geneva-born diplomat Philippe Mottu, bought the Caux Palace. The Caux Foundation was established to manage the facilities, as a Conference Centre for the global movement of Moral Rearmament, initiated by the American Lutheran minister Frank Buchman in 1938.

The annual summer Caux Conferences kicked off with more than 3000 people visiting the new Conference Centre.

Many meetings between French and German delegations took place in Caux, creating a solid ground for further reconciliation efforts between the two countries torn-apart by war.

Japanese political and union leaders met with their former enemies in Caux, after the devastation of the Hiroshima and Nagasaki nuclear attacks.

The Caux Palace became a reference for reconciliation and trust building efforts.

After the death of Frank Buchman, the movement started a transition process. But the Caux Foundation continued to run the Caux Conferences in the following decades.

The Caux Round Table was launched in 1986, as a joint initiative from top executives of European, Japanese and US companies. In 1994, the Caux Round Table launched the “Caux Principles for Business”, one of the first international code of business ethics.

With the support of the Swiss Federal Department of Foreign Affairs, peace and reconciliation efforts for Burundi and the African Great Lakes Region took place at the Villa Maria and the Caux Palace. Government officials and rebellion leaders held talks alternatively in Caux and in their own countries.

In 2001, in order to better adapt its institutional goals as a global network, Moral Rearmament was renamed as Initiatives of Change, continuing its work as an organization dedicated to building trust across the world’s divides.

The Initiatives of Change Switzerland Foundation celebrated its 70th anniversary with a commemorative series of events in Switzerland and during its annual summer conferences.

The Caux Conferences was transformed into the Caux Forum, hosting a range of training programmes, dialogues and conferences during summer.

The vision of opening the Villa Maria and Caux Palace year-round led to the development of hospitality services. The Caux Conference and Seminar Centre was launched, offering groups and organizations a space for dialogues, training and retreats.

The Caux Forum became the Caux Forum Online, so as to share the spirit of Caux, and valuble tools developed through it, with the world during the COVID-19 pandemic and beyond. This laid a basis for hybrid events in the future.

The Caux Conference and Seminar Centre started welcoming big external groups during the summer. In collaboration with Montreux Riviera Tourism, the Caux Palace and its gardens were opened to the public and guided house tours were offered.

Initiatives of Change Switzerland celebrates 75 Years of Encounters. Activities honouring and creating meaningful encounters will be held online as well as in Caux.

At the same time, IofC’s global women’s empowerment initiative, Creators of Peace, and the Caux Scholars Program, an academic course focused on conflict resolution, are celebrating their 30th Anniversary. Both were initiated during the summer conferences in Caux in 1991. 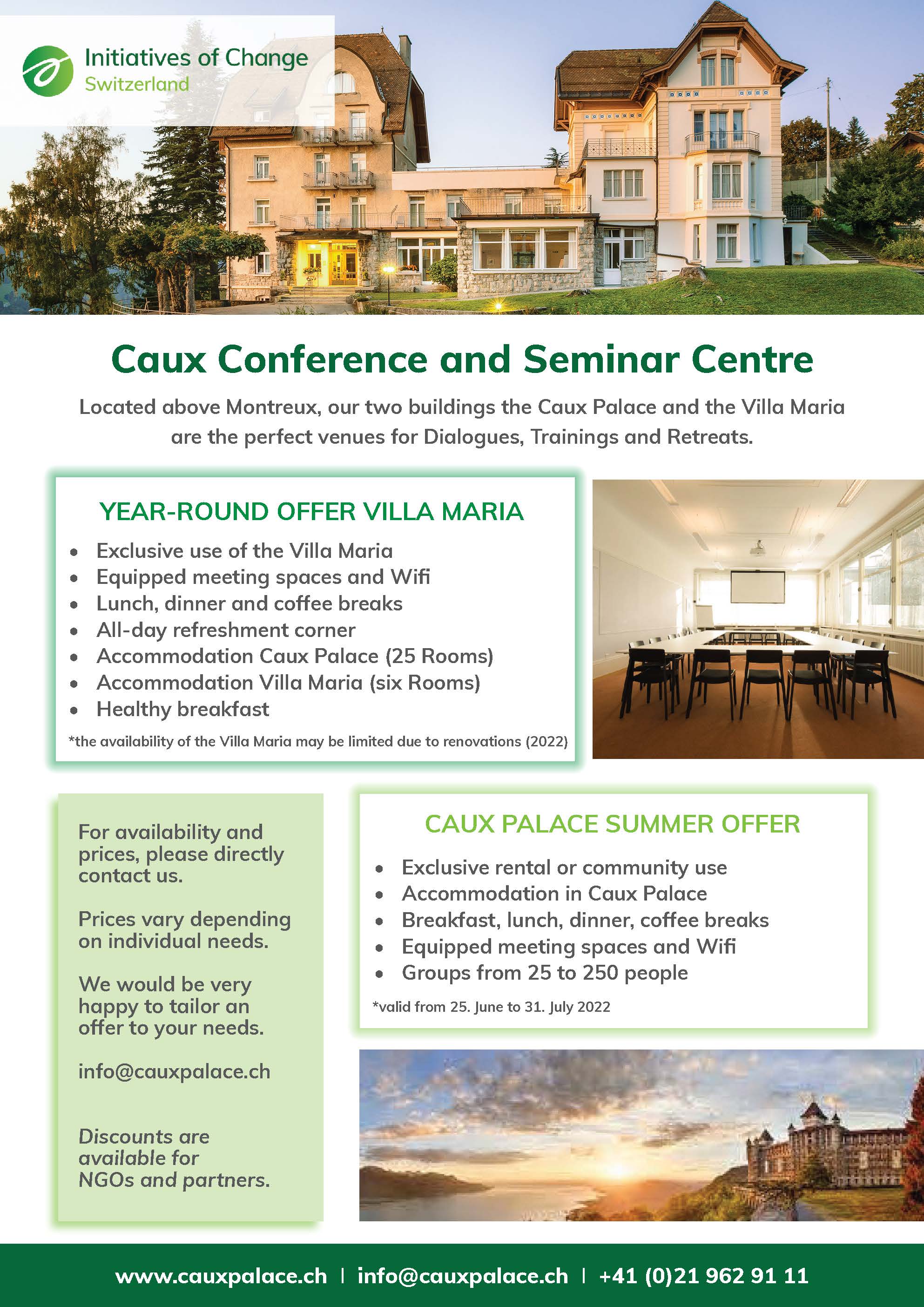